In John Amos Comenius PEDAGOGICAL-PHILOSOPHICAL GARDEN, the passing of human life is equal to his PANSOHIC IDEA OF LIFELONG LEARNING. The statue of the Thinker entered the garden in October, the time when walnuts ripen. In the IDEA, they symbolize the prenatal period of human life. It is Comenius’ first symbolic school, the school for future parents awaiting their child to be born. In the GARDEN, this period is symbolized by STAGE 1: AUTUMN, with a pair of walnuts on a branch of the walnut tree (see the picture).

STAGE 2: WINTER is the period of EXPECTATION OF THE SPRING, OR THE PERIOD OF BIRTH AND CHILDHOOD. It is a very important STAGE of the SCHOOL for the parents, who consider their children to be ”more lovable and precious than gold, silver, pearls or jewels” and learn to love them wisely. Such love will bear fruit throughout their life, at ALL THE STAGES OF THEIR PERMANENT EDUCATION. After the winter, when the statue of John Amos Comenius survives in the winter scenery of the GARDEN till the SPRING, the longed-for season will come and bring first flowers and buds on the trees and shrubs. In our GARDEN, in the hearts and other geometric figures in the form of red wooden fences, designed in the autumn, the flowers and shrubs will bloom, the leaves on the trees will develop, and the conifers will get green. We will see the statue of Comenius in the spring scenery of the GARDEN. COMENIUS ALLEY will begin to ”teem with life”, and we will bring Comenius’ basic IDEAS out of this scenery.

The creator of the GARDEN invites you to a virtual trip of it in WINTER. 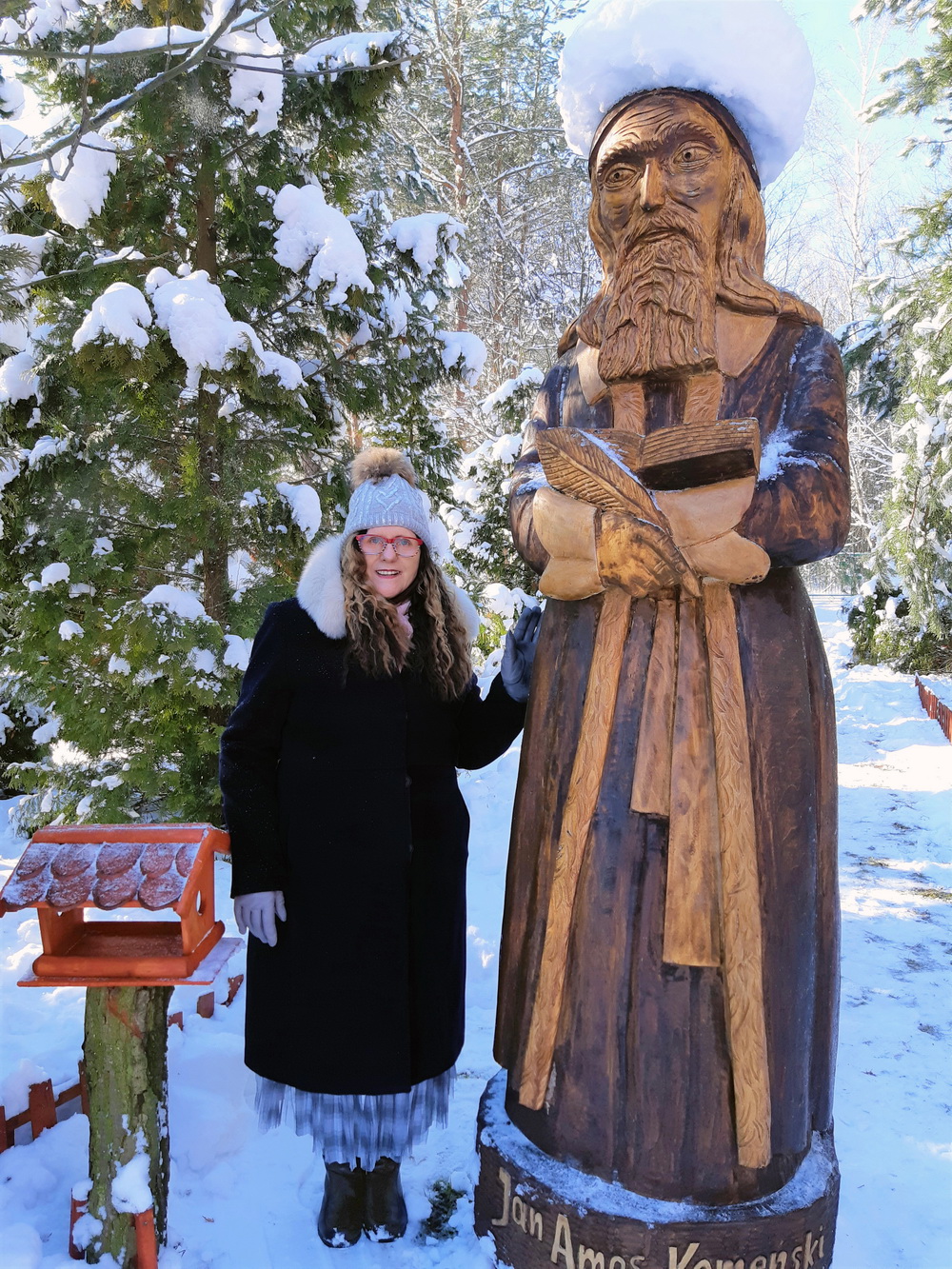 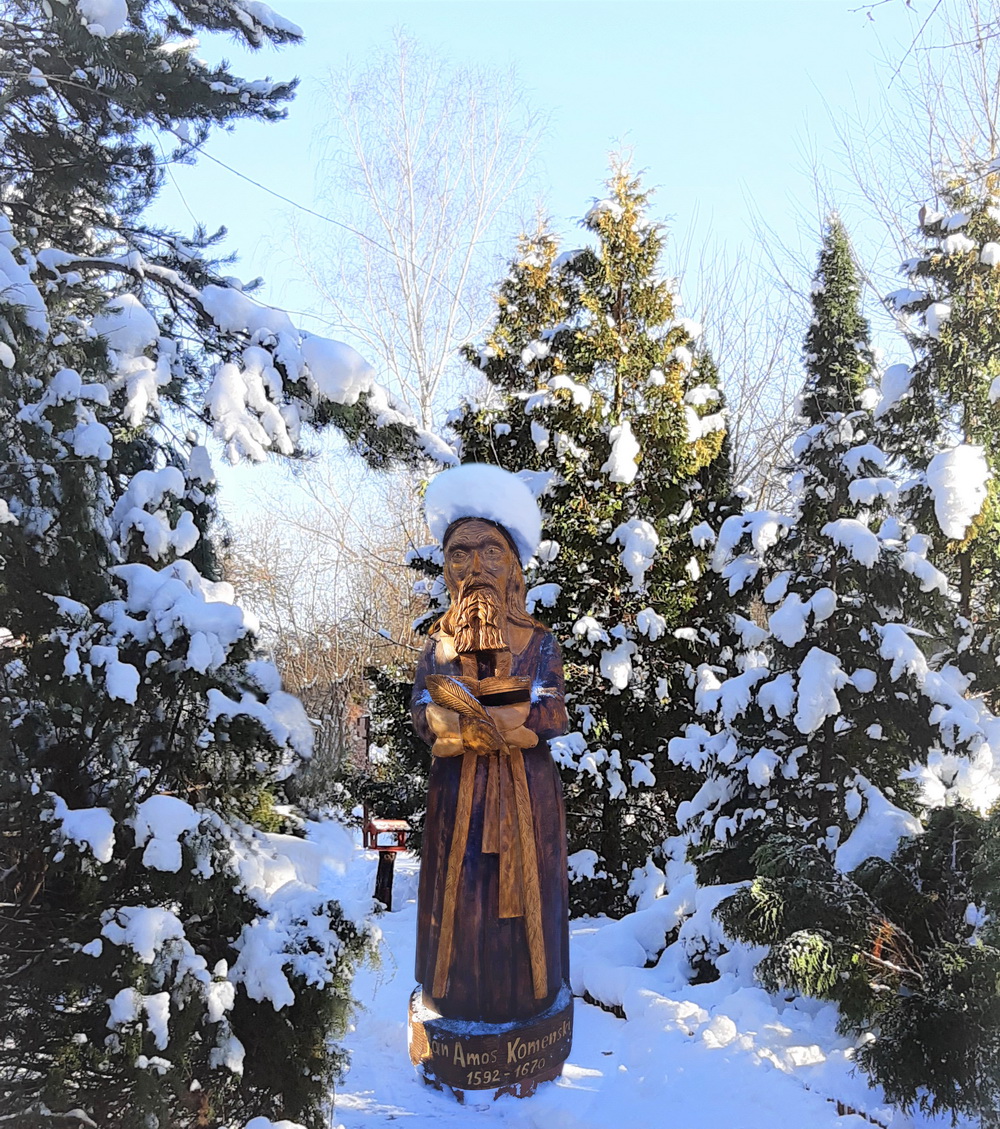 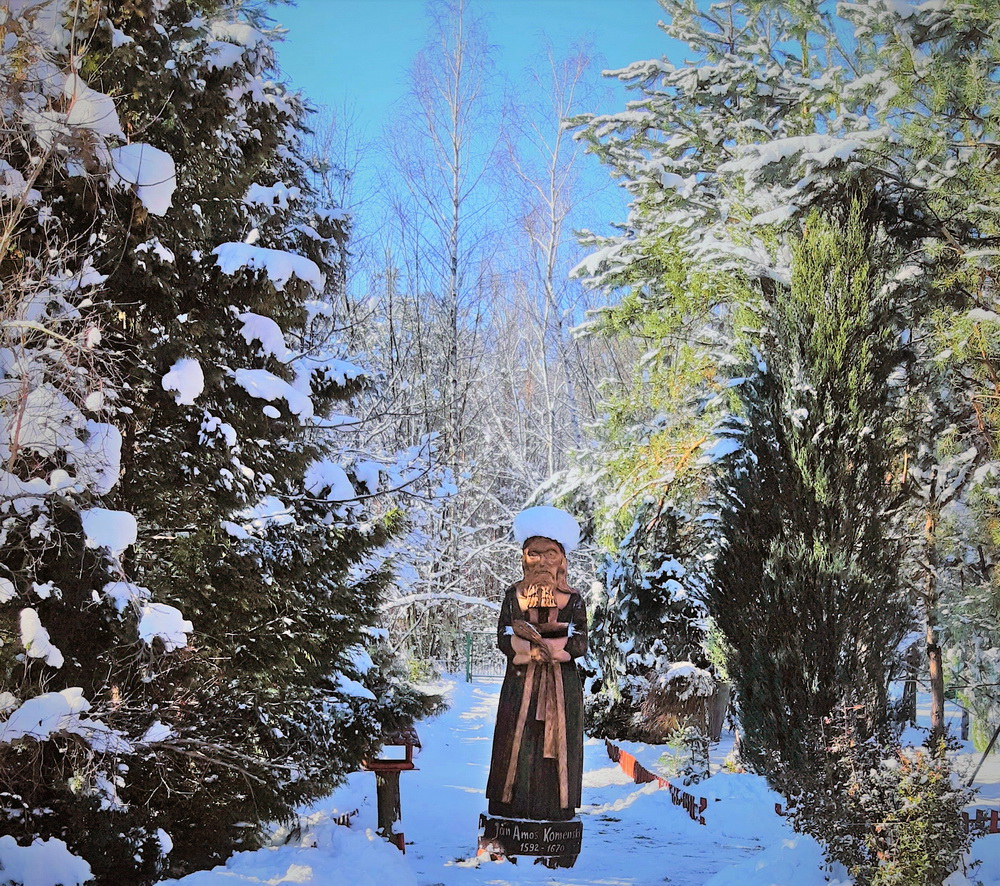 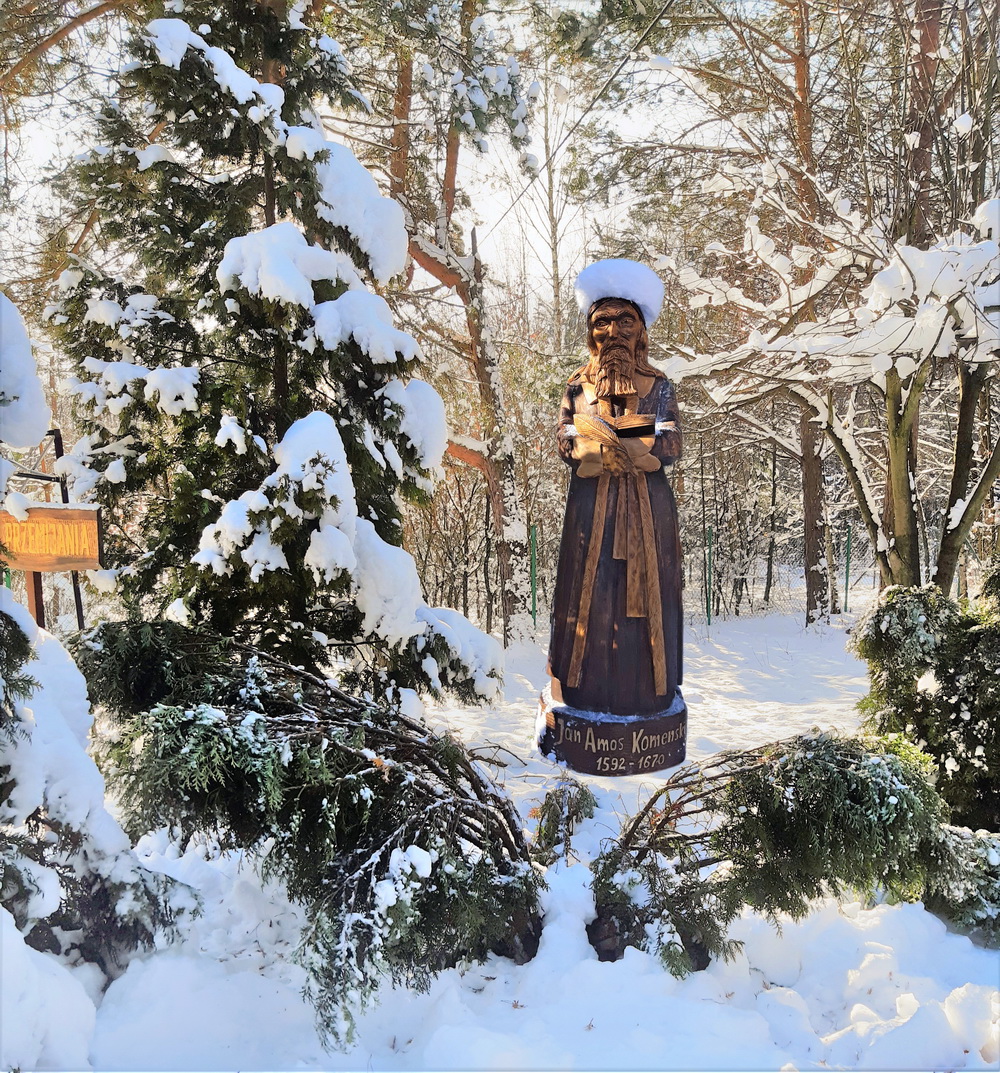 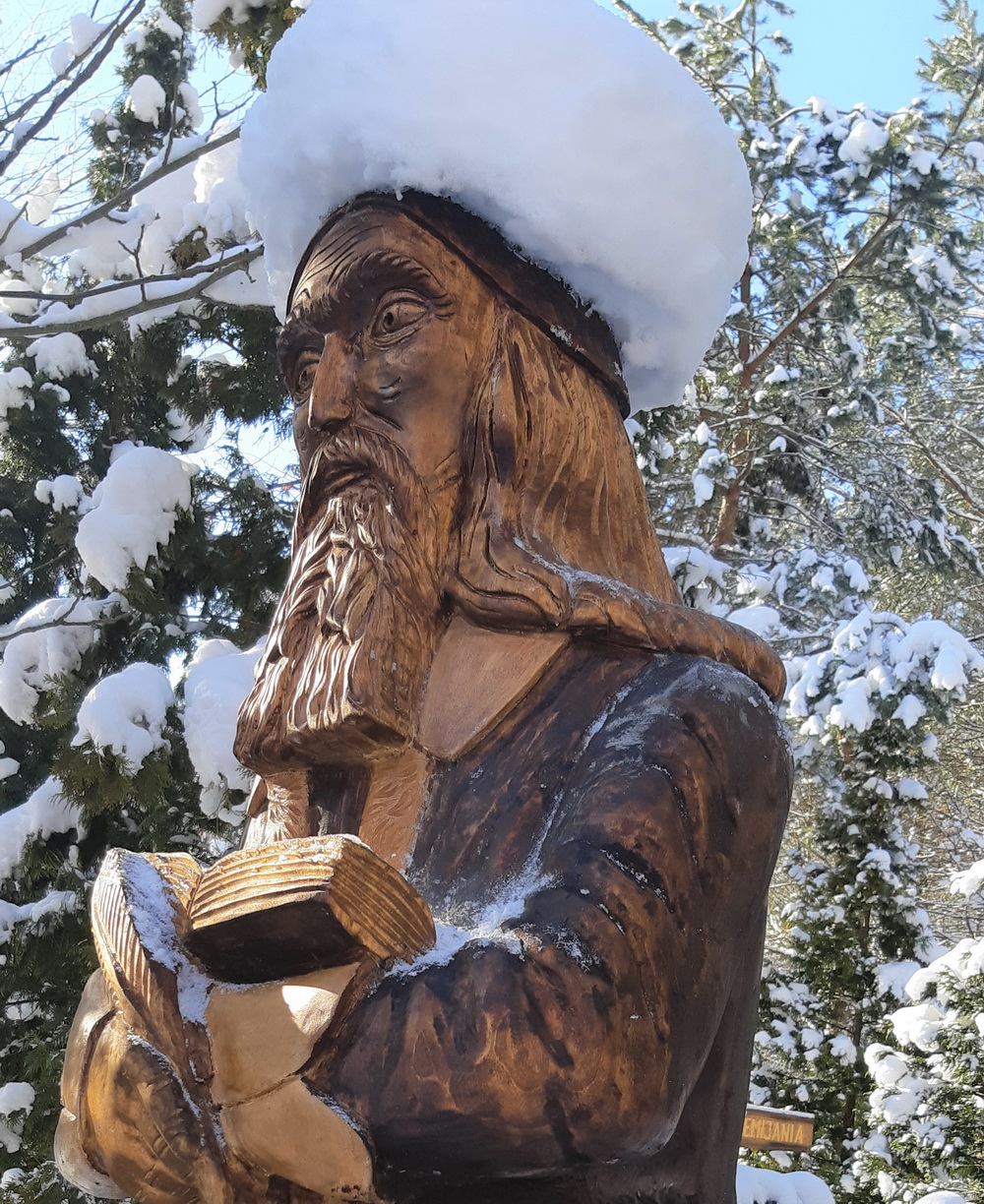 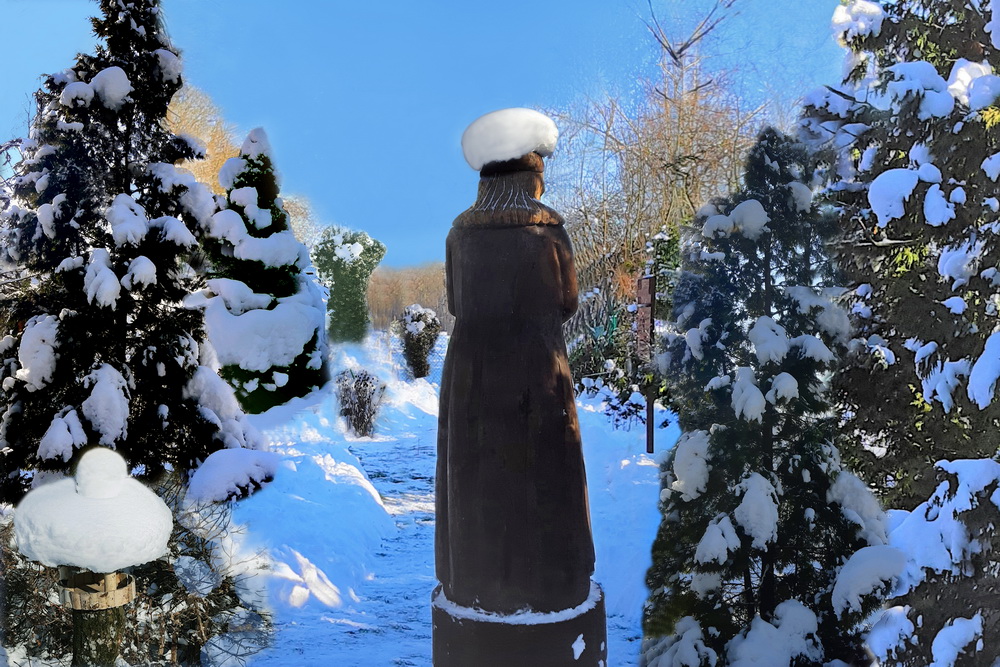 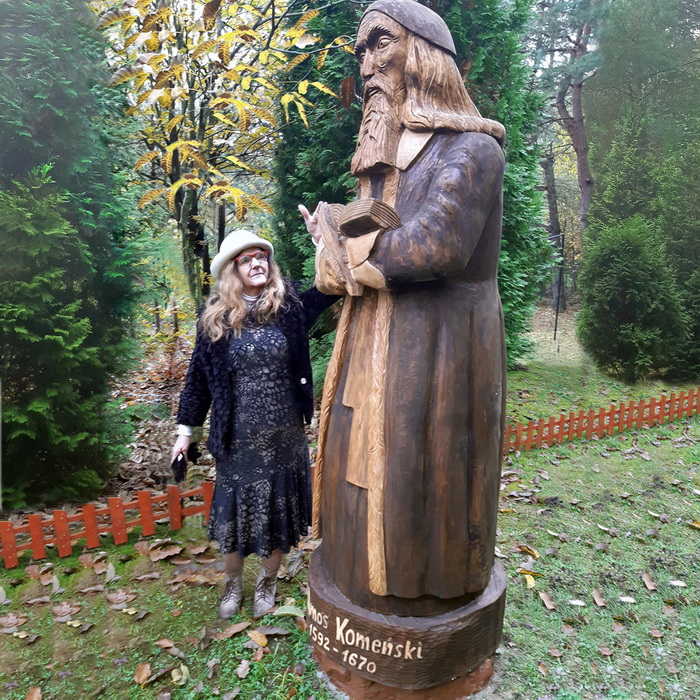 MADE BY SIEDLCE SCULPTOR WALDEMAR KOS, IT IS LOCATED IN THE MAIN COMENIUS ALLEY 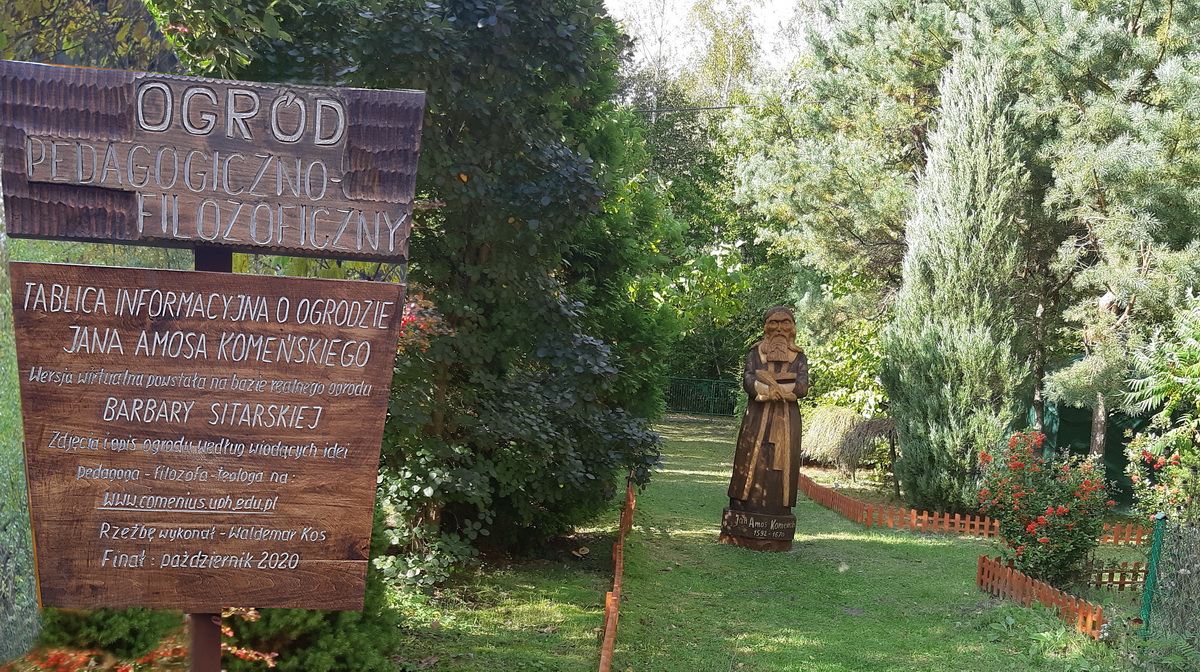 THE INFORMATION BOARD PROVIDES THE VISITORS WITH THE NECESSARY INFORMATION

John Amos Comenius’ garden is being created as part of the research PROJECT in the field of PEDAGOGY (2020 - 2022) entitled FROM JOHN AMOS COMENIUS TILL THE PRESENT. THE MEANING OF THE GREAT PEDAGOGUE’S IDEAS FOR THE DEVELOPMENT OF PEDAGOGY AND EDUCATION

The members of the RESEARCH TEAM:

John Amos Comenius’ virtual GARDEN, based on Barbara Sitarska’s real garden, will be open in November 2020, on the 350th anniversary of the death of John Amos Comenius (1592 -1670). The pedagogue died on 15 November in Naarden, the Netherlands. This year Europe and the whole world are celebrating his anniversary. In the age of the COVID-19 coronavirus, this anniversary is being celebrated differently than planned. The celebrations are listed at our website.

Siedlce research CENTER of the Pedagogy Institute of the Department of Social Sciences is celebrating the anniversary with the opening of JOHN AMOS COMENIUS’ PEDAGOGICAL-PHILOSOPHICAL GARDEN and a virtual trip of it. Today we invite you to the GARDEN, to become familiar with its description. The GARDEN will be described in sections corresponding to the seasons of the year. Pictures of the GARDEN in each season will be posted systematically. The point is to capture the natural changes taking place in the plant life of the garden in spring, summer, autumn and winter. According to the Thinker’s idea, they symbolize the entire cycle of human life, the passing of time. For Comenius, the whole life is school, starting with the prenatal period (in the GARDEN it is symbolized by a walnut tree with branches holding pairs of walnuts exposed in the pictures), which lasts throughout your life and involves both institutional and symbolic schools (before you start school and after you leave it, till the school of old age and death). The plant life of the GARDEN in each season of the year will reflect Comenius’ idea of permanent/lifelong learning, which has had a real resurgence in the 21st century and is a priority issue all over the world. 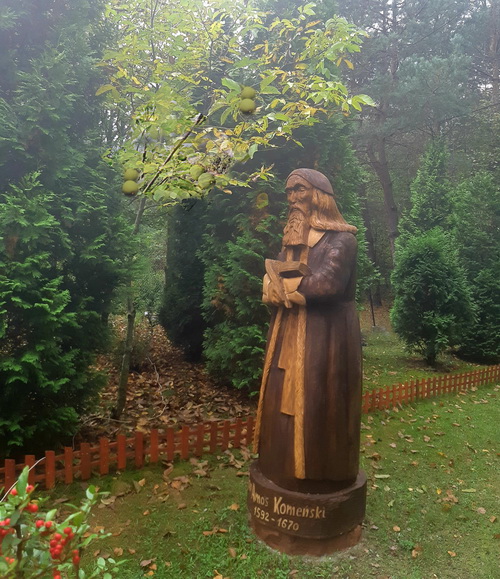 The virtual GARDEN is being created in late autumn (STAGE 1 – AUTUMN 2020), based on Barbara Sitarska’s real garden, located in her home town Niewęgłosz near Radzyń Podlaski. It is where she was born and spent her childhood and early youth. The garden was created thirty-five years ago and since then it has been cared for with great emotional involvement. The idea of Comenius’ GARDEN emerged under the influence of a virtual trip of Comenius’ philosophical GARDEN in Berlin, which has a many years’ tradition. 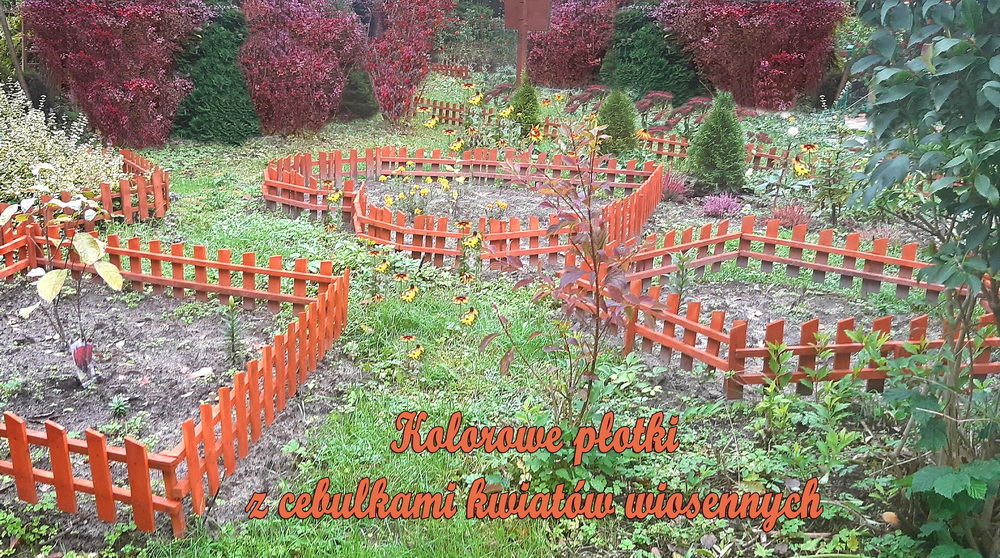 With the development of the research of Comenius (since 2007) and the appearance of the annual publication “Siedlce Comeniological Research Bulletin, PEDAGOGY series” (since 2014), the idea of the garden emerged gradually. Last year (2019), the dream started to come true, with the garden being prepared with the main Comenius Alley, where a sculpture of John Amos Comenius was to be placed. It entered the garden on 26 September 2020, and belongs to Barbara Sitarska. The statue was made by Siedlce sculptor Waldemar Kos, member of the Association of Polish Artists and Designers. 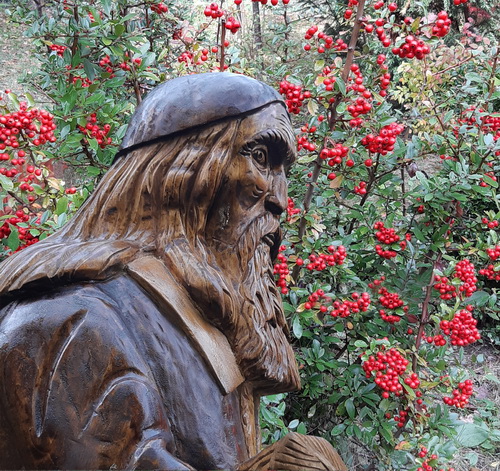 Various shrubs and trees in the garden will symbolize the Thinker’s main pedagogical and philosophical ideas significant at present: the idea of permanent education, the idea of universal light and wisdom, the idea of self-cognition, and many others. The structure of the garden will be as follows: the main Alley, symbolizing PANSOPHISM – Comenius’ specific philosophy, with side alleys leading from it, marked with red fences (other objects in the garden are marked with labels in the shape of a heart and geometric figures), made by Piotr Kozak, the owner’s permanent collaborator. The alleys symbolize particular ideas as signposts leading to consecutive educational paths throughout human life, full of “labyrinths”. The virtual garden of the described ideas of Comenius’ will be mostly used by students (Comenius laid foundations for the scientific didactic system) and everyone interested in comeniology, a developing branch of science, which is described in Volume 6 of “Siedlce Comeniological Research Bulletin, PEDAGOGY series” (2019). It is easier to interpret Comenius’ pansophism relying on the described ideas (according to conducted qualitative research). 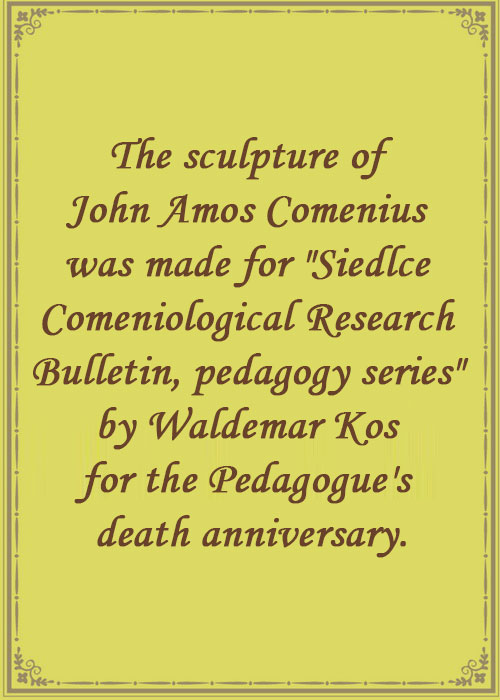 The year 2020 is the second year of the ministry project: Support for scientific magazines. The result will be the edition of Volume 7 of “Siedlce Comeniological Research Bulletin, PEDAGOGY series” entitled John Amos Comenius’ pansophism in interpretations and reinterpretations by Polish and European comeniologists. Its subject matter corresponds to the idea of the GARDEN.